A game has been announced by Future Mark, the company that “used” to make PC benchmarking software like Future Mark 3D Vantage. This did only work on vista, I HOPE that’s not what the game will be limited to, so it doesn’t FAIL. The game has a yet to be confirmed release date. I couldn’t see this coming out any time soon, but definitely keep your eyes peeled! Read on for tons more information on the game.

The game Shattered Horizon is a multiplayer first-person shooter with unique freedom of movement and realistic zero gravity combat.

Man is back on the Moon and the companies that took him there are reaping huge profits. Their greed soon leads to the largest mining accident in history, when overexploitation of a risky new technique called Incite Mining leads to a catastrophe of unprecedented scale. An explosion throws billions of tons of rocky debris into near-Earth space, its aftershocks threatening to tear apart the Moon itself.

Fragments of the Moon settle around the Earth and become known as the Arc, named after the dramatic shape they draw across the night sky. With Earth surrounded by debris there’s little chance of rescue or return for the thousands of people stranded in space.

The International Space Agency’s astronauts and scientists trapped in the battered International Space Station are given the task of apprehending those responsible for the catastrophe. Weapons are among the last supplies sent to the station before the supply route from Earth is cut.

The Moon Mining Cooperative finds itself facing serious charges after only barely surviving the cataclysm. Cut off from Earth, they see independence and self-sufficiency as their only possible future and the ISA as a threat to their existence.

The two sides are drawn into an armed conflict. Desperate battles are fought over strategic locations and the scant supplies from Earth that make it through the shroud of debris. Control of the Arc now means the difference between survival and death in the cold of space.

Future Mark are using an in-house engine evolved from the technology that powers 3DMark Vantage!
Shattered Horizon will be using PhysX and PC’s with multiple processor cores!

Here is what Future Mark have to say already about the game:

Shattered Horizon is a multiplayer first-person shooter where players fight in zero gravity surrounded by the broken remains of orbital infrastructure and billions of tons of rocky debris thrown into orbit by a huge explosion on the Moon.

With simple and intuitive controls players have complete freedom of movement, making full use of the distinctive environment to control the battle. Shattered Horizon rewards players with gameplay and tactics impossible in games constrained by gravity.

The trailer was released today first (i think) over at game trailers. 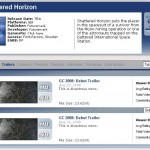 With a game being produced by a team like Future Mark, i can see this being a big success, in an epic graphical game. Trailer look amazing, view the HD version at Game Trailers. Also don’t forget to checkout Furture Marks site for Shattered Horizon!

Can’t wait to hear more and more about this game!